Della’s North Carolina bakery is legendary! She is overjoyed when her best friend’s daughter returns from New York to get married and asks Della to make her wedding cake. Della, a sweet-natured Christian, is forced to re-examine her deeply-held beliefs and her own marriage when she realizes there is not one bride, but two. Faith, family, and frosting collide in this timely new play by Bekah Brunstetter, writer for the NBC hit This is Us.

“I’m in a world that is not designed for me.” 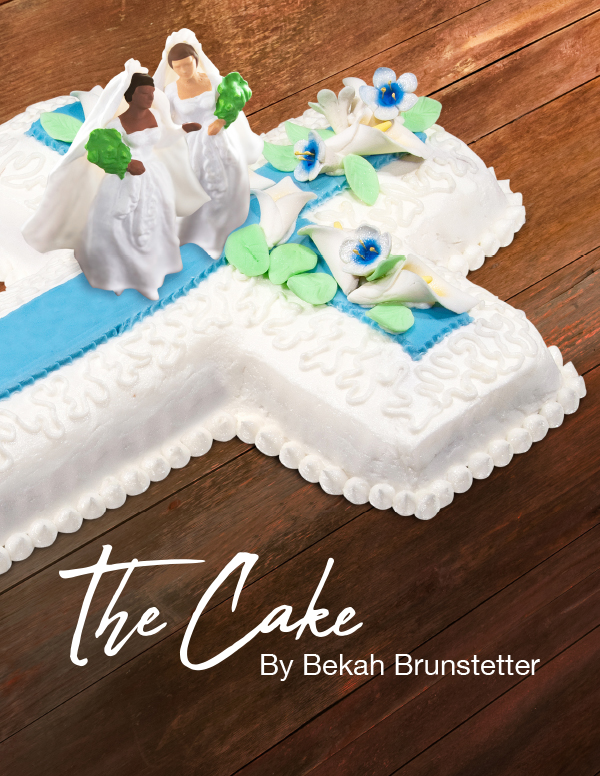 CATF: Why can’t you have your cake and eat it, too?

Bekah Brunstetter: In terms of the play, does that phrase mean that you can eat cake with someone even when you don’t accept her or his beliefs, while fundamentally disagreeing with them? I want to believe that you can, and that’s what the play is hoping to exhibit. It’s not productive to reject people’s points of view and not treat everyone with kindness and respect. It is possible to eat cake –-by that I mean have fellowship with people you fundamentally disagree with.

By the time this interview is published, the Supreme Court may have ruled on Masterpiece Cake Shop v. Colorado Civil Rights Commission – a case about a gay couple who believe their civil rights were violated when the owner of the bakeshop refused to make their wedding cake because of his Christian beliefs. The baker also argued that he is an artist. On behalf of the Trump administration, Solicitor General Noel Francisco argued: “A custom wedding cake is not an ordinary baked good; its function is more communicative and artistic than utilitarian.”

What is the function of a wedding cake for you?

Cake is incredibly universal. It’s really hard to find someone who doesn’t like cake. A wedding cake is particularly universal because it brings everybody together after the ceremony to celebrate the union and experience pure joy. It’s the specific thing that means the wedding has happened, so it is not a regular cake. The Masterpiece Cake Shop baker offered to make the gay couple a birthday cake, he didn’t have a problem with that, he just couldn’t make a wedding cake.

I see both sides of this issue and couldn’t have written the play if I couldn’t see both sides. My parents share the same beliefs as this baker, so I can’t turn my back on it. And I can’t turn off my empathy, so I’m stuck trying to figure out what to do.

If the Supreme Court rules in favor of the Masterpiece Cake Shop, isn’t it a slippery slope to taking away same-sex marriage and other LGBT rights?

I’m constantly playing devil’s advocate with myself. It’s so complicated because I do see that it’s discrimination. If you have a storefront that offers to make cakes for people, you need to make a cake for anyone who wants one. We would culturally understand the baker’s perspective – and I’m not equating the two at all – if he didn’t want to make a cake for a Satanist. People are reacting with that same extreme feeling.

I absolutely see how it is a slippery slope and could easily become refusing anyone service at any time. What I don’t understand is this: Jesus stood for love and acceptance and hung out with prostitutes and lepers. How can this baker use Jesus to justify discrimination?

You’ve said that there are lots of plays about lesbian couples like Jen and Macy in The Cake, but not so many about Della, the owner of the bakery. “I’m fascinated by stories where somebody said this stupid thing,” you have said, “and then all of a sudden, we all hate them, they’re horrible people. I always have sympathy for them, because I say stupid things all the time.”

My dad was a politician for years, and once I started building traction in my playwriting career, he told me, “You’ve gotta be careful what you say,” and, “No matter what you say, they’re going to twist it to whatever they want it to be.” Not just “they” – the media – but also people who are out to misconstrue what you’re saying to fit it into their narrative.

When your father supported the 2011 Defense of Marriage Act, also known as Amendment One, that defines marriage as only between one man and one woman, you said that your family was forced to “really confront our different belief systems.” What was that confrontation like?

It was more like awkwardness over dinner. It wasn’t a blowout because I’m not gay. I’m straight. Since high school, I’ve had many gay friends, and my support of them and their relationships has always been a point of contention. My father helped to pass this bill; he did not create it or bring it to the table. Nevertheless, it passed and his name was on it. I could no longer ignore what was happening within myself, my family, my circle of friends, and my theater community. I could no longer be silent. So during conversations, I started to challenge my parents. But it wasn’t like a God of Carnage throw down. It was more like me simply saying, “No, that’s wrong.” which was huge for me at the time.

A reviewer of this play faulted you for not forthrightly labeling Della “a bigot.” In response to that, a reader challenged the reviewer with, “You still have to love your family. You still have to reach across the table . . . . Della is lovable because most of the time your family members are lovable . . . . You have to give people time to change, reevaluate and change some more.”

That response was so beautiful. The reviewer, in fact, proved my point. He wasn’t self-aware enough to realize that he was making a judgment about how a person should live in this world. I’m a straight, white woman, and I need to remember that many people have been marginalized all their lives and view the world differently than I do. I also need to remember that there’s a privilege that comes with my perspective. So I don’t get upset when people respond to the play that way because I don’t know what discrimination they’ve experienced. All I can do is try and share my point of view, but that doesn’t mean other people’s points of view aren’t valid.

Fear. Fear of change, fear that the moral fabric of the world is fraying so much that the world that conservatives were raised to believe in is on its way out. That’s terrifying and unsettling regardless of how you feel about the Bible. That’s what I’m trying to do with Della’s arc. I wanted to dramatize how rocked she is.

When you go home, you have lunch with your mom’s prayer group, “just the most loving most hilarious women you would ever meet. They’re constantly praying for me. It’s just this, like, beautiful hug.” Do you pray?

I do pray, but my prayers are usually selfish, anxious, and neurotic. I pray before I take off on every flight. I pray and give gratitude for so many good things happening, it makes me feel like something terrible is about to happen. I’ll give praise and thanks. And when friends or family members are going through challenges health crises. But I’m not an on-your-knees-every-night-before-God prayer-er.

You said in one interview that you feel strongly that movies and plays “should be optimistic because “there are so many horrible things right now.” In another interview you said that as a writer you saw “awful pain as grist for the mill.”

I do feel that things should ultimately be hopeful. I can’t write anything that’s just straight-up bleak; that’s not me as a writer. That being said, I do feel that it’s important -even if it ends up in a hopeful place – for a play to explore horrible things so it can become universal. You have to go far down to bring everybody back up. If you don’t go down very far, the play is not that thrilling or deep of an experience.

The writer has to go deep to the pain that made her or him write the play to begin with. I put a monologue in The Cake about what I once thought sex was, and it was so scary. I first wrote that monologue for a play when I was 22, and that play never got done. Ten years later, I’m working on The Cake, and those early feelings of shame about sex resurfaced, so I put them in the play. Those feelings needed to be in there even though it’s a hopeful play.

Why is pink lemonade cake your favorite?

Pink lemonade cake is the specialty of Moravian bakery called Dewey’s in my hometown of Winston-Salem. Every year, I had one for my birthday, and every year, my mom does insane things to get this cake to me. She’s flown across the country with the cake on her lap. She’s gotten into fights with TSA. She got it to me in New York once – I think she mailed it. The cake is emblematic of her undying love for me, and it’s the most delicious thing in the entire world.

Sarah Ruhl said, “The theater is one of the few places left in the bright and noisy world where we sit in the quiet dark together, to be awake.”

Theater is totally different from watching TV. We’re visible when we’re watching a play. And because other human beings are performing in front of us, we must give them our attention, so in a way, we’re on stage too. We can’t hide or shut down. We are awake because we have to respond to whatever happens in front of us.

What’s it like to have your play at CATF?

My professor in grad school – Michael Weller – also has a play at this year’s festival, and as a professor, he always told me what a great festival this is. Mostly, I’m excited that the play is in that part of the country. It’s been in North and South Carolina and I just love it being done in West Virginia. Evangelical Christian friends saw the play in L.A. and were very grateful that their point of view was respected. I hope there is more of that to come with this production.