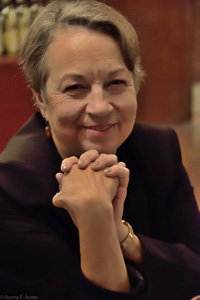 An Interview with the Playwright

CATF: The inspiration for this play is a book your mother gave you when you were a kid, My Lord, What a Morning – Marian Anderson’s autobiography.

Deborah Brevoort: My mother reads extensively on a lot of different subjects. She was a minister’s daughter and was raised in a very conservative household community in the Midwest. She’s always rebelled against the limits that were imposed on her. If somebody banned a book, my mother was the first in line to buy it. She was also very interested in the issue of civil rights, so she began to read books about civil rights and started feeding those to me.

I think I was born with a book in my hand. I was reading the letters of Benvenuto Cellini, a 16th century Italian artist, at the age of six because it was there. The complete works of Conan Doyle, Sherlock Holmes – I was done with that by the age of seven. Sammy Davis Jr’s. biography was another book that my mother handed to me. My favorite was Manchild in the Promised Land by Claude Brown which was filled with the “m-f” word. It was banned in the local libraries, so my mother ordered it from the local bookstore. Then, with her Tareyton cigarette hanging out of the corner of her mouth, she said, “Debbie, darling, you are going to read this book, but there are words in this book that I don’t ever want to hear come out of your mouth. You need to know how some people talk, but I don’t want you to ever talk like this.”

Marian Anderson said that her mother always said, “Remember, wherever you are and what you do, someone always sees you.”

That makes a lot of sense for her character because she was very conscious throughout her career of being seen and watched as well as being a role model from whom others would draw conclusions about black people.

She recognized that she was in that position and conducted herself with grace, manners, propriety, and dignity. It’s difficult to write about her because she was so diplomatic and avoided conflict or anything that would reflect badly on her, or anybody else.

How did the opportunity come up to write a play based on a historical event?

Premiere Stages, a New Jersey theater company, began collaborating with the Liberty Museum, a history museum, and started a program called Liberty Live, in which they commissioned a New Jersey playwright to write a one-act play based on an event in New Jersey history that would then be produced at the museum as a living exhibit. Then they would release a list of topics for play proposals. This year, Marian Anderson, Albert Einstein, and Princeton were on the list. When I stumbled across the events featured in this play, I did some quick research and got the commission. What is now act one, was the first incarnation of the play about those events.

At her Lincoln Memorial concert, the Secretary of Interior at the time, Harold Ickes, introduced Anderson with, “Genius, like justice is blind. Genius draws no color lines.”

It describes Einstein, too. By the way, many people claimed that the Lincoln Memorial concert was their idea. Ickes claimed it, a low-level administrator at the Department of Interior claimed it, Walter White of the NAACP claimed it, and Marian Anderson’s agent also claimed it. The truth is nobody knows whose idea it was. So I gave the idea to Mary Church Terrell. She was involved in back-channel negotiations and was such a strategist.

My husband and I live in New Jersey, and in the time that we’ve been together, we’ve been racially profiled five times, instances that were completely unwarranted, and not prompted by him doing anything illegal. Blacks call it, “driving while black.” As a white person, you don’t normally see these events up close. You hear about them or you see a white cop and black person over on the side of the street. But I’ve seen it from the receiving end. In two cases, my husband was slapped with fines for things he did not do, for which we hired lawyers, went to court, and won. The worst event happened when he was starring in the lead role in Chicago on Broadway. We were parked legally, and he was dragged out of the car, made to stand in the pouring rain, and our car was confiscated. He did not want to legally pursue this one because of its huge emotional, psychological, and financial cost. Like Marian Anderson, he didn’t want that negative energy in his life.

We now have a routine to protect him. As soon as the cop pulls us over, we go into “the system.” Hands on the steering wheel, registration above in the visor so that he never has to reach for the glove compartment so someone can’t say, “He reached for a gun.” If I’m in the car, I get the paperwork, so the first thing the officer sees when he comes to the driver’s window is my white face with the paperwork held out.

It’s very easy to discount this stuff when you hear it in the news. This is ongoing harassment of black people, and it has increased in the last few years.

You’ve had a writing dilemma about whether or not to keep a line in your play that mentions DAR’s goal, “Make America Great,” because some in the audience would automatically assume it’s a dig at Trump.

The power of theater is that an audience can enter another person’s experience. Theater builds bridges between people. The approach I took with this play was to create a situation where I invoke sympathy and empathy for Marian Anderson and Albert Einstein, both of whom were on the receiving end of horrible things. The audience experiences it more deeply rather than just reading about it.

There’s also a subversive power to theater. If you are swept up in a story and rooting for the lead character and care about them, your humanity as an audience member is expanded. This is why theater was required attendance in ancient Greece. It was seen as a necessity for the proper functioning of democracy. I certainly hope people are rooting for Marian Anderson in this story, no matter their political viewpoint.

This play was read in Orlando, in a predominately conservative neighborhood during a Senate election won by a Trump sympathizer. The large audience of several hundred, largely conservative people was completely engaged with my play. Then came the line about “Make America Great,” which actually was one of goals of the DAR. That line broke the spell of a number of people in the audience. Suddenly they saw me trying to make a political statement about Trump. They smelled an agenda where there wasn’t an agenda. I lost them, and I don’t want to lose anybody. If that line – historically accurate as it is – stops the empathy, kicks somebody out of the play, and makes them retreat from the story, that line’s not worth it to me.

This plays sees both the nuclear bomb and music as powerful weapons. Music was extremely powerful in the civil rights movement.

I am actually now working more in musical forms than in non-musical forms. Music gets to the heart and can move people in a way that words alone can’t. My words can travel farther and deeper if they were attached to the wings of music. I’ve become committed to the idea that musical theater is probably the most important form to be working in right now.

I am leading a workshop in Nairobi, Kenya where I am mentoring 16 teams of Kenyan composers and authors to create the first ever group of Kenyan musicals based on Kenyan stories as well as music, dance, and tribal traditions. When I work in play form, I reach a smaller audience. Attach a story to music and your story expands – you get a bigger audience.

Despite deep tension over tribal differences in Kenya, the musical storytelling that we are doing in these workshops is weakening tribal boundaries, borders, and walls.

The power of art is invisible, which is why it’s so dangerous to people with power. It moves people in a way that the spoken word doesn’t. They say as soon as Beatles music was smuggled behind the Iron Curtain, it outdid the Soviet Union. A culture that had been deadened by totalitarianism was brought back to life, energy, and joy because of music. It led to the fall of the Berlin Wall and communism.

Marian Anderson understood that on some level, even if she didn’t articulate it.

In Chester Bailey, another play in CATF’s 2019 repertoire, the character Dr. Cotton makes this observation about his patient, Chester Bailey, to his father, “Your son, Mr. Bailey, is the author of his own mercy. He stitched it together out of what was around him. Just like the rest of us.” How have you been the author of your own mercy?