Zoe and Janine are two people who should have a great relationship: both painfully smart, left wing, privileged intellectuals who believe in scholarship, critical thinking and inclusiveness. But instead, they focus on their differences. Janine is a 1960’s liberal—a Gloria Steinem feminist, and a free speech advocate. Zoe is a millennial liberal, and a warrior for equality, —and deeply tired of waiting for progress that has not come. Riddled with smart dialogue that injures, insults, and ignites, this dramatic confrontation forces us to empathize with two vibrant and complicated women. It’s a play that airs the secret things we are afraid to say…

“I’m starting to think the most important thing anybody ever learns is their own opinion.”

Performed with a brief pause. 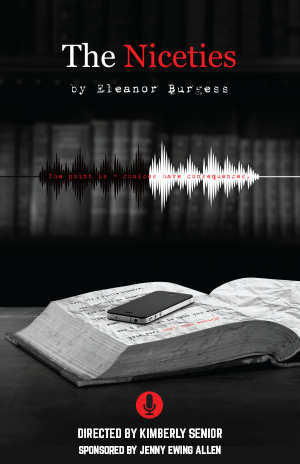 CATF: Why don’t we listen to each other anymore?

EB: At my age, it’s hard to imagine the halcyon days of thoughtful political discourse. When we were able to listen, it was because some groups were dominating the conversation and other groups were staying quiet or talking amongst themselves. Now everyone is speaking up and advocating for themselves and creating conversational chaos.

The Internet is also a huge, huge factor, and that is why I love theater because theater is the anti-Internet. The Internet allows us to put anything out there without looking another person in the face and seeing its impact. Its incredibly fast pace of exchange, dialogue and interacting with semi-strangers diminishes the obligation to listen to another person. If you lived in a small village, you would have accountability because you would probably know that person.

Zoe claims to be vulnerable yet she is very aggressive and her aggression is shocking and powerful. Janine’s flippant and heartless approach to Zoe is equally shocking.  They are both insightful, but aren’t both monsters in their own way?

It was fun to write about two women who are both so firmly tied to their convictions that they will go down with the ship and bring a lot of other people with them. There’s a joy to watching that on stage because in our personal lives, we seldom follow a conversation all the way through. We either have conversations with people we agree with, or we back out of a conversation the second it gets uncomfortable. The cathartic release of The Niceties is that neither of these characters will give up, so they follow that conversation all the way through and the audience gets to follow through to the wreckage they create. We never would do this in a conversation because somebody would clam up.

You are a Yale graduate. Did you experience the kind of academic rigidity dramatized in The Niceties?

No, but I’m now realizing that I took a lot of academia for granted such as the way we talked about American history or British imperial history. The emphasis at the time was on the priorities of British government and not the wreckage the British government created in other places amongst other groups of people. Looking back, I realize no one was saying, “This whole conversation is missing a huge element – the perspective of people who aren’t from the elite western canon.”

Can an academic anticipate and address all the varied “triggers” the broad spectrum of women and minorities experience? Is it enough to treat students, especially those from marginalized communities, with a modicum of respect and humanity? Could it be that simple?

It’s not that simple because there are so many different interlocking issues. A professorship that reflects the population of the United States would be a good start. In a climate where minority students can expect to encounter very few professors who have shared their life experiences, “triggers” –individual, verbal missteps – are much more painful because they are part of a much larger system of curricula that is not sensitive. Professors can do their best to anticipate and try to address how students are going to perceive what they are saying, but they also have to push for changes in leadership and in how we put together our curricula. How do you put together a sourcebook? How do you put together an important document? It’s a bigger undertaking than just trying to be nice or sensitive. It involves asking yourself, “Is a lot of what I know somewhat wrong?”

Zoe refers to her “mental trauma” or how “emotionally difficult” it is to learn from Janine.  In light of that, an article in the September 2015 Atlantic entitled, “The Coddling of the American Mind” argued that too many college students engage in “catastrophizing,” which is to say, turning common events into nightmarish trials or claiming that easily bearable events are too awful to bear. The article concludes, “smart people do, in fact, overreact to innocuous speech, make mountains out of molehills, and seek punishment for anyone whose words make anyone else feel uncomfortable.”  What do you think of that?

Multiple things can be true at the same time which is what The Niceties is about. It’s easy for people who are older and not a part of the political conversation to look at what’s happening on campuses and say, “Those are petulant children.” And it’s partly true. Of course, this is not a traumatic thing. But, in dismissing the small parts, it’s important that people not let themselves off the hook to the point of not seeing the more serious issue. Why are American history textbooks not also addressing the black experience in America?

Janine is fiddling while Rome burns. She’s addressing all the ways Zoe is not getting things just right: Zoe’s putting her point across in a messed-up way, she’s not following the rules of academic procedure, she’s using words like “trauma.”  However, Janine does not hear the basic fundamental point which is, “Why did your course ignore black experience in America?” If she could hear that point, Zoe would probably feel a lot less traumatized.

What is Zoe not hearing?

Zoe is hearing things, but not valuing them as much as Janine does because Zoe is younger. She is hearing that freedom of speech and rigorous intellectual methodology are important, but Zoe disagrees that it is as important because she’s had a different life experience from Janine. Janine’s experience is that you have to use these old-fashioned techniques to gain prestige. Zoe doesn’t want to hear that.

How do you respond to this quote from Becoming Wise: An Inquiry into the Mystery and Art of Living by Krista Tippett: “The conundrum of the twenty-first (century) is that with the best intentions of color blindness, and laws passed in this spirit, we still carry instincts and reactions inherited from our environments and embedded in our being below the level of conscious decision . . . . What we’re finding now in the last thirty years is that much of the work, in terms of our cognitive and emotional response to the world, happens at the unconscious level.” If this is the case, can Janine and Zoe not help themselves?

All of this is so complicated and a two-hour play can’t begin to understand this. Janine and Zoe do see each other as individuals, and they do engage with each other’s thought. We can declare ourselves color blind, racist and post-racist, but America is still very racist in terms of who gets a job and who goes to jail. As an individual, I am totally capable of treating a person of another race with dignity and respect, but that does not absolve my structural role. That, in many ways, is what The Niceties is about. In a different universe, Janine would be a very good teacher for Zoe. She is able to see Zoe’s intelligence, promise and potential, and is smart enough to encourage it. In the old use of the term, “racist,” Janine doesn’t have much bias against Zoe. But outside of the office where they are meeting, the world is messed up, the country is messed up and Janine and Zoe to different extents care about that.  That’s where they can’t get along. Janine is offering what she thinks is equality.  She’s trying to be for Zoe the mentor she wishes she had had when she was an undergraduate. But because Zoe has lived in an America that has never listened to her, equality doesn’t feel equal. That’s the real dilemma of the  twenty-first century.

You have said that your mantra is, “Theater as church.”

As a society, we have lost places where we can go to and tackle and wrestle with difficult, ethical ideas. Fewer people are regularly attending a church, temple or synagogue, and there really isn’t any other place where you go to wrestle with how to be a good person in the world.

Yeah, corporations would love to be the place where by buying a tote bag you have done your ethical duty. Film and TV sometime wrestles with those things, but film and TV are caught up in a much larger international financial system where things can’t be talked about because an advertiser wouldn’t like it. Also film and TV are not “in person,” and you can change the channel or turn it off the second you’re challenged or uncomfortable.

Theater is a place – kind of like church – where you go to be in person with other human beings and to watch a live human tell you about feelings and take you on a journey that may be very challenging or uncomfortable to you. Theater can challenge you to be better in ways that you don’t want to be challenged. If you are willing to go on that journey, you come out on the other side perhaps ready to look at your life with fresh eyes.

How does it feel to have your play at CATF?

It’s thrilling. The entire CATF community is creating something wonderful where plays work in conversation with each other and the plays are relevant, timely, unafraid and very bold.

I see the wisdom of not wanting anything. I see all the ways that ambition causes pain for yourself and for others; how covetousness causes pain on an individual level and on a massive societal level. But for me, not wanting anything doesn’t feel human. Striving and desire can be gluttonous, but it can also be generous as in wanting good things for other people. I would pick anything I want, and hopefully, I would then use that to take care of other people.

What’s the most outrageous thing you’ve ever done that you regret, but don’t tell me what it is. You’ve been commissioned to write a play about it.  What’s the name of the play and what’s the first line?

The play is The Niceties, and the first line is, “You’re missing a comma here.”