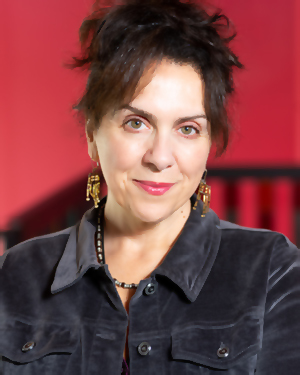 Peggy McKowen’s association with CATF began in 2006, when she designed the costumes for Mr. Marmalade and Jazzland. As her time with the festival continued, she designed costumes for: Antonio’s Song: I was dreaming of a son, The Welcome Guest, The Wedding Gift, Not Medea, Everything You Touch, 1001, H2O, and Scott and Hem in the Garden of Allah; and scenery for From Prague, Wrecks, and Gidion’s Knot.

Peggy is dedicated to creating an anti-racist and anti-oppressive (ARAO) culture at CATF. She was instrumental in creating the institution’s ARAO committee and monthly ARAO discussion groups. She is developing a strategic and ongoing ARAO plan with Sarah Bellamy, CATF’s equity, diversity, and inclusion consultant, while engaging both staff and trustees in the journey.

Peggy strengthened CATF’s educational and outreach programming. She created new initiatives to increase and sustain the attendance of young audience members including Hostel YOUTH! for high school students and CATF/U for college students, and also reimagined the festival’s internship experience for emerging professionals. She enhanced and leads talktheater, the organization’s humanities series that encourages audience members to actively discuss the themes of the plays in a variety of events including lectures, panel discussions, and deliberative dialogues.

In response to the COVID-19 pandemic, Peggy led the Contemporary American Theater Festival’s quick switch to digital programming. She envisioned CATF art in new ways for patrons and artists.  She created both the CATFUNMUTED and playcastplus series that included online engagement between audiences and artists, interviews with designers and directors, audio dramas, and community celebrations.

Peggy was the featured artist in the exhibition High Drama: Costumes from the Contemporary American Theater Festival at the Museum of Fine Arts, Washington County, Maryland, which also toured to four cities throughout West Virginia. In 2018, Peggy was named West Virginia Artist of the Year at the Governor’s Arts Awards and in 2019, she was recognized by WV Living Magazine as one of the Wonder Women of the Year. Shepherdstown’s Insurance Outfitters awarded Peggy the 2018 Culture and the Arts Guide Award for her dedication to the local arts community. She is a member of United Scenic Artists 829 and has served on the board of the National New Play Network.

Prior to joining the festival, Peggy was the resident designer for the Obie-award-winning Jean Cocteau Repertory in NY and the Phoenix Theatre Ensemble. Her regional theater work has been seen at Arkansas Repertory Theatre; Barrington Stage; Milwaukee Repertory Theater; Tennessee Repertory Theatre; Texas, Dallas, and Houston Shakespeare Festivals; and Perseverance Theater. International theater work includes the B.A.T. Studio Theatre (Berlin, Germany); the Teatro Alfa Real (Sao Paulo, Brazil); and the E.T.A. Hoffmann Theatre (Bamberg, Germany). Peggy designed the first full-length English-speaking production of The Tempest in Beijing, China and the first Mandarin translation of How To Succeed In Business Without Really Trying for the Seven Stages Production Company in Beijing.

Peggy holds an MFA from the University of Texas (Austin), and has taught theater and humanities at Shepherd University, Dickinson College, Dickinson College/London/Rome, and West Virginia University, where she was Chair of the Division of Theatre and Dance for five years and received the Outstanding Creative/Scholarship and Teaching Award several times throughout her tenure. Peggy played a significant role in creating Shepherd University’s theater major – a B.A. in Contemporary Theater Studies, in collaboration with the Department of Contemporary Art and Theater. She is often a respondent for the Kennedy Center American College Theater Festival for arts administration, design, and play performance.

In recognition of her work as both theater designer and administrator, Peggy has been featured in Live Design and Wonderful West Virginia magazines. Her production work has been captured in American Theater magazine, The New York Public Library Videotape for the Theater on Film and Tape Archive, The New York Times, Back Stage, New York Magazine, The Wall Street Journal, and The Theater Experience and Theatre: The Lively Art. Peggy is also the co-editor of the anthology, Plays by Women from the Contemporary American Theater Festival, a collection of plays by women that had their first production at the festival.