WE WILL NOT BE SILENT

A World Premiere by David Meyers
Directed by Ed Herendeen

Sophie Scholl, a German college student, led the only major act of civil disobedience during the Second World War. Sophie and her fellow students, members of a group called the White Rose, published underground anti-Nazi materials calling for the peaceful overthrow of Hitler. This timely and provocative play tells her story and explores the role that German citizens played in the rise of Hitler. This play examines the moral strength and courage that led a group of students to risk their lives for a righteous, dangerous cause.

Sponsored in Loving Memory of Shirley A. Marinoff by her Family & Friends

“Just because you repeat a lie, doesn’t make it true.” 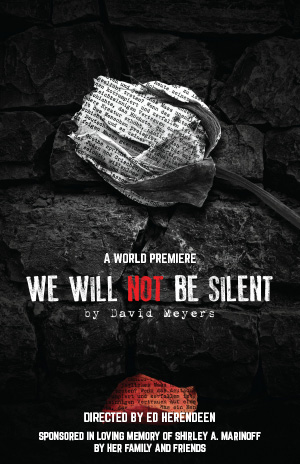 CATF: For what cause would you sacrifice your life in order to save your conscience?

DM: That question is the heart of the play, and I wrote the play because I truly did not know what the answer would be in practice. Five years ago, I was writing articles on Syria and the disgrace that America was doing nothing, even not confronting Russia. But then I realized that in America, that was very easy for me write – what was it costing me? In Russia, critics of Putin are literally dropping dead in the streets. Would I really be willing to give my life for a cause even though I thought it probably would make no difference?

That’s why Sophie and Hans and the White Rose story are so important to me. People, including me, will see this play and will want to think that they could be Sophie Scholl, but the reality is that 98% of them would be Sophie’s interrogator Grunwald because they would not be willing to make that same sacrifice.

What cause were you fighting for when you were 21 years old?

I was an intern in the White House, and one of the things that attracted me to the Bush administration was what he called, “The Freedom Agenda.”  Many people thought that this meant Bush wanted to spread his version of American democracy, but that’s not what it was. The idea was that all people of the world deserve to live, not in an American democratic system, but in some kind of democratic system. Some Republicans, particularly in Trump world, take the view that some countries – especially in the Arab world – don’t deserve or want democracy. This is a condescending, despicable view.  If you were born in America, you have an obligation to help others live in some kind of freedom. That’s what first attracted me to want to work for President Bush, and that’s why I pursued being an intern in the White House.

What did Sophie, her brother – her entire family – possess that the rest of us don’t?  Was Nazi oppression extraordinarily horrendous or were they people of extraordinary integrity?

It’s a combination of both. Theirs is the only act of public resistance to the Nazis during the war.  Both of my grandparents escaped Germany, one in 1938 and one in 1939, so I know the history very well.  The Nazis were very efficient with capturing, torturing, and killing off anyone who didn’t agree with them. I don’t think it’s a coincidence that the people who led the White Rose were students who at the time would not have been persecuted.

In his personal memoir, Not I: Memoirs of a German Childhood Joachim C. Fest, a Holocaust historian, writes, “As all others do, I do not” – a line that is actually in my play. The moral courage and strength of the Scholls, plus their religious beliefs helped them to see the world for what it was: a world of alternative facts and alternative reality. Some things are right and some things are wrong. Sophie and Hans saw what was wrong, knew it was wrong, and they had the courage to risk their lives to fight even when they knew it wasn’t going to end Hitler.

I was living in my own little world. I had read about World War I, World War II, and the Holocaust, but it was all in the past. Then 9/11 happened, and I realized that major historical events could happen right now. It woke me up to the rest of the world. I had initially gone to college to study acting and theater, but after 9/11 and learning of President Bush’s foreign policy, I knew I had to do something so I went to Washington, D.C.

What’s your perspective on why Hitler was able to wield so much power over the conscience of the nation? In his book, Hitler: Ascent, 1889-1939, Volker Ullrich quotes Hitler as saying, “I am the greatest actor in Europe.” The author also posits that Hitler was a skilled liar – he lied to friends and family and wore many masks. As Sophie says in your play, “Just because you repeat a lie doesn’t make it true.” How did someone take over the world by telling lies?

Donald Trump’s election has sparked much more interest in this play. I want to be very careful making the Donald Trump-to-Hitler comparison. Trump is absolutely brilliant at manipulating people, the press, all his different audiences – his is one of the most brilliant political acts we’ve ever seen in America. You see how his policy changes from one day to the other. He has no core belief which does separate him from Hitler. Hitler had a very solid worldview. I don’t think Trump has any worldview at all. However, both are masters at telling people what they wanted to hear and turning lies into truth.

You wrote an Fox News Opinion editorial published on May 3, 2016 entitled, “A message for my fellow Republicans: if you back Trump you will not be trusted again.” Here’s a quote from that editorial: “

“The United States of America was built on 240 years of blood, toil, and sacrifice. We owe our ancestors, and our children, so much better than handing this country over to a man of Mr. Trump’s character and intentions.”

I hesitated publishing that editorial because I knew what the consequences might be, but it ties right back into the play. How could I possibly worry about protecting my career yet write this play, We Will Not Be Silent?  How can I believe in this story and then stay silent myself?

In the course of your play, Sophie and her interrogator Grunwald develop a relationship.  In many ways, he’s a likeable character who isn’t stereotyped. You present a human who has real reasons for why he couldn’t stand up.  He didn’t have many choices, or reasons he tells himself are reasons. You were a Nazi or you were killed.

In her book, Eichmann in Jerusalem, Hannah Arendt, writes, “The trouble with Eichmann was precisely that so many were like him, and that the many were neither perverted nor sadistic, that they were, and still are, terribly and terrifyingly normal. From the viewpoint of our legal institutions and of our moral standards of judgment, this normality was much more terrifying than all the atrocities put together.” Is Grunwald worse than Hitler?

There’s a big debate in the Holocaust community about whether or not Eichmann was a casual supporter or an ardent supporter. Aside from that, most people were casual supporters. Sophie says that in the play: “And those who don’t believe – who support him anyway – you are the worst.” Grunwald and Hitler are equally complicit.

Hannah Arendt has also said, “Forgiveness is the key to action and freedom.” Do you think Sophie’s parents forgave the Nazis who condemned and executed her and her brother?”

I definitely do not. In the 1930’s, her father was an ardent anti-Nazi, but had no involvement in the White Rose even though his kids were in it. Years before he had been in prison for his beliefs. The war destroyed their entire family. I can’t imagine that parents who never supported Hitler in the beginning could ever forgive him.

We tend to deify heroes. One of the things I appreciated about the documentary, Anne Frank Remembered which won the Oscar for Best Documentary Feature in 1996, was the revelation that Anne could be a brash, free-spirited brat. The act that led to the arrest of Sophie and her brother was Sophie’s seemingly cavalier and defiant tossing of White Rose pamphlets over a balcony. Was this particular act of defiance selfish?

Sophie is not a saint or Joan of Arc figure. In the play Sophie asks Hans if their arrest was her fault, and he assures her that it was not. I believe they eventually would have been discovered. There is no way they would have survived the war.

At the Women’s March on Washington on January 21, 2017, I saw a couple of protesters carrying signs with a Sophie Scholl quote: “Stand up for what you believe, even if you are standing alone.”

She lives! And today people like Sophie Scholl are all over the world –Russia and Egypt and North Korea, and they are shot in the back of the head, put into ditches and truly forgotten. The play is about Sophie, but it’s also about all those people who are not fortunate enough to be remembered even though they made the same sacrifice.

This play is not a Holocaust play. It is a faith-based play about standing by your convictions no matter what they are or no matter what faith inspires them. In the play, Hans says, “Religion is not about the Bible. It is doing what’s right. Being a good person – deep down, no matter what you believe – that is what it means to believe in God.” When you truly practice its ideals, religion can be the greatest force for good in the world.

I, 100 percent, would not want anything. The number one thing I want now is to have a family, but I’m still single. I didn’t realize that the things I wanted would be heartbreaking when they were not attainable.

What’s the most outrageous thing you’ve ever done that you regret, but don’t tell me what it is. You’ve been commissioned to write a play about it. What’s the name of the play and what’s the first line?

The name of the play would be, Giving Up, and the first line would be, “The only thing I regret is the thing I never tried.”