A Maritime Quest for Truth

A New Play by Christina Anderson
Directed by Lucie Tiberghien

Ship’s Log: 1896. A father boards a ship and leads a mysterious expedition bound for Africa. In tow are his troubled son, a rebellious young woman, and a skeptical crew. On the open sea, an unexpected detour resurrects family secrets and reveals true intentions, fundamentally changing the course of the journey—and their lives. Christina Anderson creates a telling parable about violence, betrayal, faith, and freedom in this moving maritime epic.

“Hope damages us…It weakens one of the most powerful tools we humans possess:  doubt.  When we doubt, we question, then we seek answers.” 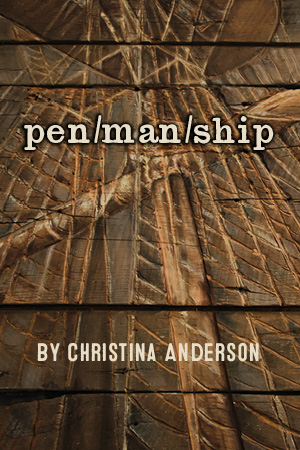 pen/man/ship received its world premiere at San Francisco’s Magic Theatre in May of 2014. 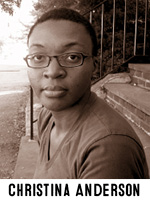 CATF: This is a big play with a small cast. It deals with black/white, rich/poor, male/female, young/old, free/slave, and gay/straight issues . . . do you need a bigger boat?

CHRISTINA: One of the first things Lucie Tiberghien, who is directing the play, asked me was, “How big is this boat?” When this play was produced at the Magic Theater in San Francisco, interns built a dramaturgy wall and filled it — in the shape of a boat — with all the images and themes that the play addresses. It took up the whole wall, reaching into the ceiling. The first time I saw that wall, I thought: “This is a huge play.”

CATF: Explain the title of your play, pen/man/ship.

CHRISTINA: When I was doing research on the time period of this play, I came across a lot of journals and letters because that is how people communicated and made notes of their existence.  I knew someone was going to be keeping a log on the ship. Then I came across the word, “penmanship.” I wouldn’t have figured out that title if I hadn’t seen that word. I want the titles of my plays to reflect the engines of my plays.

CATF: Ed Herendeen described this play as “Mutiny on the Bounty” meets “12 Years a Slave” meets “Roots” meets “Moby Dick.” How would you describe it?

CHRISTINA: I would describe the play as an examination of exceptionalism, and the ripple effect of a fatal encounter. I wrote this play around the time George Zimmerman was to be charged with shooting Trayvon Martin. No one is 100% sure how that encounter went down except for the two men who were involved and one of them was dead. I was fascinated that in our century with all these cameras and devices that this was still possible. The only real evidence we have of this encounter is a scream that is heard over a 9-1-1 call.

CATF: This play takes place after slavery, emancipation and the Jim Crow laws, but before the Civil Rights movement. You go back in time to make your point about exceptionalism.  Why go back in time?  How does that make it relevant for today?

CHRISTINA: The kernel of this play started as an assignment in grad school. The theme was the trope of a “fallen woman.” I was already looking at that time period and what was happening to black people. Then I had a residency at Magic Theater where I was surrounded by water because Magic is right next to the Golden Gate Bridge. Every day whenever I pulled into the parking lot, the water and the breeze would hit my face; something I never experienced when I was growing up in Kansas – a land-locked state. Beautiful boats would go by, and I had never actually been in a boat. Actually, I’ve never been on a ship.

CATF: How do you illustrate “exceptionalism” in your play?

CHRISTINA: With the character of Charles.  He has earned the trust and “camaraderie” of white people to give him access to this ship, money and job.  He also kind of sits on his “throne” because of that. He has allowed these gifts and opportunities to inflate his ego. This has also made him believe that he’s above a lot of people, which in a way, leads to his downfall.

CATF: Let’s talk about Ruby. In this play, she’s described as “pure darkness” or “darkness on this ship,” etc. Is she the conscience of this play?  Is she the devil?

CHRISTINA:  She is not the devil. In my ship research, I learned how poorly women were treated, and was fascinated by that. I knew that there was going to be a protest on this ship, and I knew that I wanted Ruby to lead it.

CHRISTINA: Because I wanted to push against this narrative of women being trouble on a ship. I wanted to write a different story. I was interested in a woman becoming the voice for these men because in so many ship narratives, women get tossed around like coins.

CATF: Ruby says, “Hope damages us. It weakens one of the most powerful tools we humans possess: doubt. When we doubt, we question then we seek answers. Humans achieve knowledge, enlightenment.”  Hope damages us . . . really?

CHRISTINA:  Yes, Ruby’s a tough woman.  But I don’t believe hope damages us. Ruby as a character comes from a very unique period. Back then, church was also a place for political conversations and strategy. When Jim Crow and all the lynching and murders were happening, a sect of black people turned its back on religion and Christianity and become atheist. In Ruby’s eyes, when people turned to prayer to seek an answer from the Lord, they needed to be reminded about church oppression.

CATF: Earlier in the play, Ruby says, “The religion you practice is a belief used to confine the thoughts and spirits of colored people even after the Emancipation set us free.”

Is that why she changes the word, “light” in a scripture verse to the word, “darkness”?

CHRISTINA: It’s twofold. Ruby is trying to demote the sacredness of scripture, and she’s also saying, “I can have a belief of my own.” The notion of darkness and light travels throughout the play. The sun blisters down on the upper level of the ship. The lower level is dank and dark. Charles reaches his descent in the pit of the ship. Even at the end of the play, there’s darkness.  When I was writing the play, I knew that we would never get off that ship.  We would not see the characters board that ship, and we would not see them get off because I wanted that space of limbo.

CATF: In an Atlantic article entitled, “There Is No Post-Racial America,” Ta-Nehisi Coates writes, “We should seek not a world where the black race and white race live in harmony, but a world in which the terms black and white have no real political meaning.”

What do you think of that?

CHRISTINA:  How in the hell are we going to do that? I could say that it would be awesome. A couple of years ago, I wrote a solo show called Hollow Roots. It’s about a woman who looks to be black to us and over the course of the play, we find out that she’s lost her blackness and now represents the start of post-racism. It was when Obama was taking office and white people were saying, “Wait! Wait! This means this society is post-racial!” Only white people were talking about it. They weren’t talking about the repercussions of this for people of color. I wanted to write this play from this black women’s point of view and her losing her identity.

Because race has a huge history of oppression in it, it’s going to be tough to get to that place. I don’t know if that place is as much of a utopia as we say it is. That was what I was wrestling with in that solo piece. I’m working on a companion piece right now because here we are eight years later and we have Black Lives Matter. There’s a huge investment in the upcoming generation of black people to hold on to blackness for their dear life.

CATF: You have said that you want to, “create the kind of theater that will ignite change.”

“Ignite” is a pretty potent verb.

CHRISTINA:  I do a ton of research and pull historical references for my plays because I think we’re living in a time period where our memory of oppression, violence and tragedy is just so short-term. We can’t learn if we keep forgetting, especially with something like pen/man/ship. People always ask, “Were people really trying to build penal colonies in Liberia as the play narrates?”  Actually, my research was about penal colonies in Australia. Still, no one ever says, “That’s ridiculous. They couldn’t build a penal colony in Liberia.” They all say, “I didn’t know that.”

In terms of igniting change, I don’t think my plays will start a revolution, but I do hope when someone sees my work that it sparks a conversation, that it sparks a way of thinking, that it sparks them going back, reading things, and asking questions. God forbid that we ever again come up against something like Jim Crow. But if we are in a place where we remember and learn lessons, we’ll react differently.

CATF: Sarah Ruhl – a playwright you admire — has said, “I think a person has to believe in something or search out some kind of faith . . . either you know why you live or it’s all small unnecessary bits.” Why are you living?

CHRISTINA:  I wish someone would ask me, “Is there something that’s not in your bio that you would want people to know about you?”

CHRISTINA: I would refuse to answer any question asking me to speak out against any black artist.