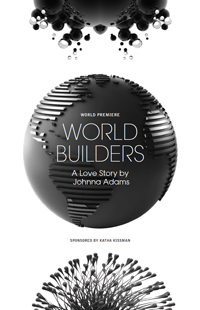 A Love Story by Johnna Adams

Directed by Nicole A. Watson 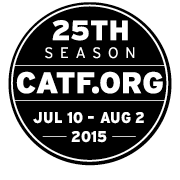 Max and Whitney live in their own, imaginary worlds. They are both patients in a clinical trial experimenting with a new drug – a treatment that will cure them of their schizophrenic dreams and flights of fancy – that will make them functioning members of society. As the pills take effect their fantasies fade. And amidst their struggles to preserve their illusions they fall in love. Max and Whitney must choose between a love that is real and the worlds that they have built.

Johnna Adams received a Steinberg/American Theatre Critics Association Citation in 2013 for her play Gidion’s Knot. She is the 2011 recipient of the Princess Grace Award and a 2012 Finalist for the Susan Smith Black-burn Award. Gidion’s Knot. was published in the December 2012 edition ofAmerican Theatre Magazine. The Contemporary American Theater Festival premiered Gidion’s Knot in 2012 and twelve regional productions were planned around the country in the following 2013-14 season.

CATF: Where did you get the idea for “World Builders?”

JA: I have a friend with schizoid personality disorder, and I have a bipolar disorder as do several members of my mother’s family. I think every writer has a touch of the kind of disorder that the two main characters in “World Builders” – Whitney and Max – have. I became very obsessed with this idea of people who can create their own imaginative worlds.

CATF: You have said that you write about what you’re learning rather than about what you know. What did you learn from writing, “World Builders?”

JA: I had the opportunity to explore schizoid personality disorder. The questions in this play are: “Is mental illness really so bad?” “At what point is mental illness productive or even superior to normal interactions in the world?” “Who’s allowed to make that judgment call?” “Is the patient allowed to say, ‘I’m not suffering. I’m kind of enjoying my mental illness’?” At what point does it become obviously unhealthy, insane behavior? There’s some validity to that type of argument. My characters are exploring that concept. They don’t mind their mental illnesses.

Learning to live with something like a bipolar disorder means looking for the positive. I know that I wouldn’t have my playwriting career without my illness, so I try to embrace it as much as I can. At the same time, I would probably have done some better things in my life if I didn’t have it. Often, it’s a negotiation. The play is a dramatization of that, of me exploring that idea.

CATF: Do you identify with one character over the other – Whitney or Max?

JA: Probably Whitney. Max is a lot more regimented and trapped by his disorder. Whitney is too, but not to the same extent.

CATF: The two worlds these characters build could not be more different. Whitney’s is vast and complex and Max’s is small and dark.

JA: This play explores the process of poetry in the realms of the vast and the miniature. Gaston Bachelard is a literary critic who wrote Poetics of Reverie: Childhood, Language, and the Cosmos. This work constantly inspires my writing because it attempts to create a poetics and a logic for essentially a reverie state . . . everything from the kind of reverie you experience when you’re reading a book and your mind wanders in between a period and the next space, to daydreaming – when you flat out get lost in memories or fantasies. What happens to you? What triggers that? One of the concepts Bachelard explores is the effect of immensities and miniatures on poetic ideas. Think of the ocean – the type of poetry that immensity inspires in the body. On the other hand, think of a doll house – all the miniature furniture or a city built inside a nutshell . . . the type of reverie that triggers is just as strong and intense, but completely different.

Whitney and Max have different poetics that are complementary but are also diametrically opposed. The type of feeling Whitney likes to create with her world is an expanse in herself. Max is compulsively recreating the ideas of control and miniature and containment.

CATF: In your play “Gideon’s Knot” and now “World Builders,” you make a fierce case for protecting the imagination. What’s so important about the imagination?

JA: I couldn’t get through my life without it or without being able to indulge it. Another idea behind “World Builders’ is this: What if George R.R. Martin decided one day that he wasn’t going to finish his books, i.e., “My relationship with my wife is suffering. It’s not healthy to be so immersed in the world of Game of Thrones. I’m just going to stop.” Some psychiatrist might applaud that, but the rest of the world would want to storm his house like angry peasants and demolish it. They would be furious because that imagined world is so important to so many people.

How much of American culture – especially with the rise of episodic television — is dominated by fantasy world building and imagination scapes? I, like everyone else, am increasingly dependent on it. World building fulfills a rich, wonderful need for storytelling. I worry about the kind of life I would live in the absence of all that richness.

CATF: You have said, “Stifle the imagination and lose one of the greatest assets of humanity.”

CATF: Is a wild imagination better than no imagination at all? For example, the writings of James Holmes, the Aurora, Colorado theater shooter, are very, very wild.

JA: Absolutely, a wild imagination is better than no imagination at all. The flatness of the world and of existence without imagination is just hard to contemplate. Imagination is not a bad thing. I get very worried when people claim that the imaginations of serial killers or mass murderers triggered that type of tragedy. You are looking in the wrong places. Look instead at a frustrated outlet for feelings they can’t understand and how, over time, it explodes.

CATF: Are psychotropic drugs bad for the imagination?

JA: I’m not going to fly in the face of modern psychiatry and say these drugs are bad. I’ve had moments with my bipolar disorder where that kind of medicated dullness is preferable to the alternative. I’m in a good place right now and not on medication, but I have been. The medication I was on didn’t deaden me completely, but I know a lot of them do.

I know many bipolar people who worry that through medication, they may lose the benefits of the condition of being bipolar. I would very much mourn losing my bipolar edge. I wouldn’t want to lose my disorder entirely even though I would probably have a more productive, healthier and happy life without it. The feelings you can get in the mania part help me to write and complete my plays. They help me to come up with the worlds in my plays.

CATF: You have said, “You can only be defeated by invisible demons if you believe in them and let them work on you.”

JA: The problem of being afraid of a mental condition is worse than the condition itself. When I stopped being afraid of potential occurrences of my mania, it made all the difference. Then it was incredibly easily managed, but it’s the fear that’s not manageable. I equate fears with demons.

CATF: In the play, Whitney tells Max that she doesn’t like that her drugs are “substituting feelings for other people in place of our worlds . . . if the pills work, I’ll be someone without a heart.”

JA: This is a play of extremes. The idea is this: “Is love worth killing two entire worlds over?” The conclusion of the play is, no, it really isn’t. Max and Whitney love these worlds. To them, these worlds are not bizarre or strange or dark and disordered daydreams. They have a reality that we really don’t understand just watching them. To Whitney, this is absolutely her life. Every relationship she’s ever had as an adult had to fit into her world with her characters.

CATF: In an interview in 2010, you said, “It takes time to get your playwriting to come from your subconscious and for your fingertips to understand your plays as well as your imagination. Your imagination is inert, but your fingers are agile little workers. Fingers actually do things, fantasies don’t. Your plays live there, not in your head.”

JA: If I were Max or Whitney, I would sit in a room and be perfectly happy just having my plays in my head. But I’m not. I’m a playwright and I need my fingers to work. I need to actually turn on the computer and write. I’d be much happier if I could just look in my head and say, “That’s great! That’s lovely!” But I can’t. That’s the big trick of writing. Getting a play from your head to the page. In order to get there, you need audience feedback. You need to learn how to listen very intently while an audience is watching your plays. Once that alchemy happens, then you can correctly translate what’s in your head. However, it’s still not a sure thing. I still only hit it once every other play.

JA: The successful ones are dark. I have to keep myself entertained while writing and something dark and sort of forbidden keeps me interested. Dark things tend to be secretive things, they tend to be things we don’t discuss in public settings, and that creates a very interesting atmosphere in the theater. Like somebody screaming in church or somebody doing something inappropriate in a courtroom.

If you simply gather people in a room and reconfirm everything they believe, you haven’t created good theater. Theater seems to work best when something is slightly inappropriate to the setting.

CATF: You said that the theater that excites you is “the theater that makes you laugh a lot, and then unexpectedly cry. You can feel the air leave the room for a minute and the audience holds their breath.”

JA: Your primary tool for fixing your plays is being an audience member, and being hyper-aware of how an audience perceives your play. I get 99 percent of my feedback for rewrites by listening to the plays. I put a lot of pauses in plays for the audience because I like those moments of stillness where you can feel anyone around you coming to the same conclusion about what was just said on stage; we’ve all come to some mutual understanding none of us could articulate if we tried. I listen for a real sense of communion.

JA: Yes, there is something to it that’s sacred.

CATF: The playwright Barbara Hammond ended an article she wrote entitled, “How to Stay a New York Playwright” with this: “Now close your eyes again, envision a stage, and watch someone walk on from stage left. Get that pencil and write down what she says.” My last question to you: Close your eyes, someone is walking on from stage left. What is she saying?

JA: Is this a verbal writing prompt? I don’t have a good character coming in right now on my mental stage. That’s hard for me, finding the right place to invite those characters in. That’s not something I would do too lightly. If I’m going to create somebody walking in from stage left, I need to be in a sacred place to do it.